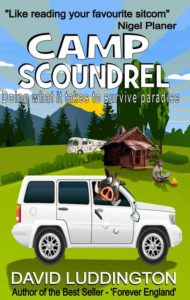 When ex-SAS soldier, Michael Purdy, comes in front of the judge for hacking the bank account belonging to the Minister for Invalidity Benefits and wiping out his personal wealth, he braces himself for a prison sentence. What Michael doesn’t expect, is to be put in charge of a group of offenders and sent to a remote location in the Sierra Nevada Mountains in Spain to teach them survival skills as part of their rehabilitation programme. But Michael knows nothing at all about survival skills. He was sort of in the SAS, yes, but his shining record on the “Escape and Evasion” courses was more a testament to his computer skills than his ability to catch wildlife and barbecue it over an impromptu fire. Basically, he was the SAS’s techy nerd and only achieved that position as a result of a bet with a fellow hacker.Facing a stark choice between starvation or returning home to serve out their sentences, the group of offenders under Michael’s supervision soon realise that the only way to survive is to use their own unique set of skills – the kind of skills that got them arrested in the first place.

The security guard closed the door behind me and leaned with his back against it.

“So, you’re that squaddie that nicked five million from the Minister for Disability and stuff, what’s his name? Oh yeah, Stephen poncy Lethbridge.” He nodded thoughtfully. “Respect to you.”

“Ex-squaddie,” I said. “And I didn’t actually nick it.” I settled onto the hard wooden chair by the radiator and stared at the walls. Drab cream with highlights of institutional grime, broken only by the odd poster explaining various rights to which I was entitled. I wondered if this was the last I was going to see of the outside world for a while.

“They’re all innocent in here.” He wriggled his back against the door as if trying to scratch an unreachable itch. “I’ve been working in these courts for ten years now and I’ve yet to see a guilty man.”

“No, seriously, I didn’t steal anything. I just made it go away.”

The guard pondered that piece of information for a moment then, “What, magic, like Derren Brown? How did you do that then?”

“I hacked into his bank account. Money is only ones and zeros in an electronic box these days. I just poked around in the box and turned all the ones into zeros. It all went away. It can’t be stealing if I didn’t actually take it.”

“Did the jury buy that?” He nodded his head towards the courtroom across the hall.

“You should’ve kept it for yourself and buggered off to Marbella. That’s what I would’ve done.”

“That wasn’t the plan,” I said. “He’s the self-serving prig who cut all the benefits to the disabled. I wanted him to feel what it was like to have to live on the pittance he voted for.”

“And now you’re facing a spell inside and he’s back to swilling down the Moet on his yacht. Makes ya’ think.”