Whose Reality is this Anyway? 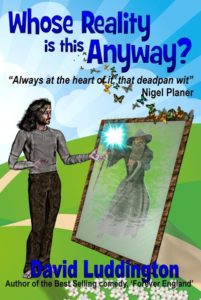 About Whose Reality Is This Anyway?

“The funniest book of the year.” – Claire Ashton, Editor the Book Reviewer.

Retired stage magician turned professional mystic debunker, John Barker, finds his sceptical beliefs under fire when he encounters a strange man who claims to be Merlin. After several unsuccessful attempts to rid himself of his increasingly unpredictable companion, John finally relents and agrees to assist in the man’s crazy mission, to find the true grave of the mythical King Arthur.

“Whose reality is this anyway?” is a warm-hearted tale of what it means to be an individual and to follow one’s dreams. With his trademark cast of oddball characters and absurd situations, David Luddington once more transports us into a world where who you are is more important than what you are.

“David Luddington epitomizes the elusive quality of writing that he perpetuates - the British Comedy.” – Grady Harp

The headlights of an oncoming car flashed in my eyes and seemed to be heading straight towards me. I instinctively pulled to the nearside and then a face appeared on the windscreen and I felt a bump. I hit the brakes, kicking gravel as I brought the car to a standstill. Shock kept me locked in position for a moment as the image of the face replayed in my mind.

I jumped from the car and scanned the side of the road. It took a moment to find him. A shadowy figure stumbled up out of the muddy rhyne and then collapsed in a heap on the grass verge. His face, cast in the pulsating orange glow of my hazard lights, blinked in and out of sight. Okay, don’t panic. Mustn’t move him. Where had I heard that? E.R.? Or was it House? Was that right? Should I trust American dramas for first aid reality? I panicked and moved him into what I hoped was a more comfortable position. He groaned and tried to push my arm away. He was still alive at least. The flashing lights made it difficult to see him clearly. His long grey hair tangled with mud and bits of grass and lay straggled across his face. Several days’ worth of beard showed through the mud. I pulled my jacket off and wiped his eyes clean with the sleeve. He grumbled again.

“What?” I helped him into a sitting position. It was probably all wrong and no doubt I was dislodging some crucial vertebrae or something but I couldn’t leave him lying in the mud like that.

“Demon owls.” He picked some soggy leaves from his hair and stared at them for a moment before folding them neatly into a bundle and putting them in his pocket. “Demon owls,” he repeated. “They come here with their eyes full of the lights of Luna.” He gripped my arm with a strength that gave lie to his frail appearance. “We need to find the caves of Trewar Venydh. Where’s Harold?”

“Harold?” Oh, hell. There’s somebody else here. I cast my eyes around trying to see through the flashing car lights.

“Ah,” he said as he reached into the bank behind him. “There you are.” He pulled a large walking stick from the grass and I assumed that was Harold. “Come along, we have work to do.” I wasn’t sure if he was talking to me or Harold.

I helped him to his feet just as another car approached.

He yelled at the glaring headlights as they approached. “We’re too late. The owls have found us.”