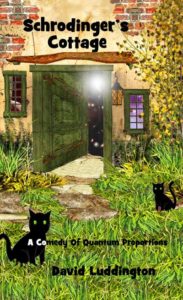 Tinker's Cottage nestles in a forgotten corner of deepest Somerset. It also happens to sit on a weak point in the space-time continuum. Which is somewhat unfortunate for Ian Faulkener, a graphic novelist from London, who was hoping for some peace and quiet in which to recuperate following a very messy breakdown.It was the cats that first alerted Ian to the fact that something was not quite right with Tinker's Cottage. Not only was he never sure just how many of them there actually were, but the mysterious way they seemed to disappear and reappear defied logic. The cats, and of course the Pope, disappearing literary agents, mislaid handymen and the insanity of Cherie Blair World.As Ian tries to untangle the mystery of the doors of Tinker's cottage he risks becoming lost forever in the myriad alternate universes predicted by Schrodinger. Not to mention his cats.Schrodinger's Cottage is a playful romp through a variety of alternate worlds peopled by an array of wonderful comic characters that are the trademark of David Luddington's novels.For fans of the sadly missed Douglas Adams, Schrodinger's Cottage will be a welcome addition to their library. A heart-warming comedy with touches of inspired lunacy that pays homage to The Hitchhiker's Guide whilst firmly treading its own path.

For many writers the hardest part of writing is the opening line. I wish. I have hundreds of opening lines. I have a file on my laptop dedicated to nothing but opening lines. I have enough opening lines to fill two complete volumes, if only I could find a way of joining them all together. Nor is my problem the famous 'Writer's Block'. Tania always said I suffered the exact opposite, she used to call it 'Writer's Diarrhoea'.

No, for me it's the voices. The incessant voices that clamour for my attention, jabbering, making demands. To which ones do I listen? Do I listen to the characters in my comics who all seem to have their own opinion as to how they see my plots unfolding? Or do I listen to the ones that tell me to take all my clothes off in the Bluewater Shopping Centre and sing Bohemian Rhapsody from the upper balcony? In retrospect it seems such a simple choice but at the time I was slightly confused. Or mildly bewildered as I prefer to call it and not the alcohol-induced borderline schizophrenic the therapist insisted on labelling me. Such an unfriendly label I feel.