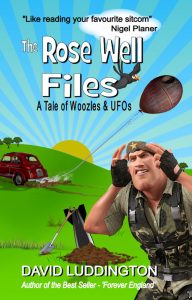 A Tale of Woozles and UFOs

This once shining icon of the Great British Holiday Camp is dying, and the last residents are more interested in preparing for a zombie apocalypse or fighting off imaginary UFOs than playing Crazy Golf or Bingo.

In addition, a foreign bottled water company is attempting to force a sale so they can seize the last asset of Rose Well Park, the Rose Well Spring. The famous spring water claimed to bestow great health and longevity.

And then there’s the bomb.

What Rose Well Park could probably do without, is a hero whose belief in a better tomorrow far outweighs any of his past achievements. But William Fox is all they have.

Armed with nothing more than an undying sense of optimism and a box of books about alien conspiracies, he slowly draws up his plans to make Rose Well Park famous.

A presentation of evidence by citation only. A woozle occurs when frequent citation of publications, lacking evidence, mislead individuals, groups, and the public, and nonfacts become urban myths and factoids.

I tidied my little display of books and comics for the seventh time, not that I was counting. I just needed to make sure each item could be seen clearly when the visitors arrived. The clock above the entrance doors showed eight minutes to ten. The hands had moved on exactly two minutes since I’d last looked and now only eight minutes remained until the doors opened. With luck, today should get rid of the last of this batch of stock I’d been carting around, and after this I’d have to seriously consider what happened next. Do I go back home to pick up another load and simply carry on selling off my old stock until it’s all gone? Or should I consider buying in more? It was a decision I’d successfully put off for a year, but which now loomed closer as each event further depleted the contents of my lockup back in London.

I pushed the last two copies of the Batman Vs Superman comics clear of the rest of the stack and studied them. They were the rarest items on the table and if I took a good price for those, they alone would cover the costs of this leg of my journey. Anything else would be a bonus.

“Your first Alt-Life Convention?” the girl at the next stand asked. She stood tall and willowy in front of her elaborate display of crystals and tarot cards. Her hair, black as the velvet covering her table, flashed with streaks of petrol blue.

“First time here,” I said. “I mostly do the London ones, closer to home. Although, I did do Conspiracy-Con in Blackpool a few months ago. That was huge.”

“Blackpool huh? That must have been awesome. I always wanted to go to Blackpool.”

I nodded and looked around the room at the scattering of exhibitors. Ten or twelve stands. It wasn’t a large hall by any standards, yet it still looked empty.

“I rather had the impression this would be bigger,” I said.

“What, here?” Her voice traced the soft, rolling sound of the Cornish accent. “Little Didney doesn’t really do alternative. More into home-made fudge and painted seashells. Their idea of alternative is to put the jam on after the cream on a scone.”