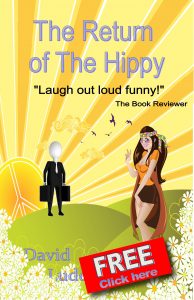 Tony Ryan is bemused. He thought he understood the way the world worked, but now, as a sacrificial lamb of the credit crunch he finds himself drifting... drifting into the clutches of the ever-resourceful Pete who could find the angle in a Fairy Liquid bubble... and into the arms of the enigmatic hippy girl, Astrid, who's about to introduce Tony to rabbits, magic caves and the joys of mushrooms. eBook of the Month Club describes 'The Return of the Hippy' as "The funniest and most heartwarming novel of the year."
Claim your free copy here

It all started with a painted tobacco tin. I don't smoke now, and haven't for some years. Part of maintaining control of my life you see. How can you expect to be in control of anything when you're always gasping for your next nicotine fix?

I like to be in control. Or I did until I saw the tobacco tin. As these things go, this was not particularly unusual. It bore the painted image of an Indian, or Native American as we're supposed to say now. In the clouds above him drifted a faint picture of a bear. Everything had a purple tinge, a dream-like quality. I used to be big on Indians in my hippy days. But that must be... oh, twenty-five years ago now. I had a dream-catcher once, long before anybody knew what dream-catchers were. Nowadays of course they're made of plastic and you get them free with a Happy Meal.

Anyway, the tobacco tin. I was on holiday in St Ives with my adoring family. At least holiday was the official line; unofficially I was suffering what they call 'executive burn-out', or Post Credit Crunch Trauma as the psychologists had taken to labelling it lately. Either way, moving billions of pounds of other people's money around the world's money markets in an attempt to outrun the approaching tsunami of world debt had finally taken its toll. Normality started to escape and I had got to the point where I didn't know which way was Tuesday any more.

It was peeping inside Pandora’s Box that finally melted my sanity like a pat of butter left out after a sunny picnic. In the world of the money movers we held a pact. Nobody was to look inside the box. It would ruin everything and send the world into oblivion. But I had peeped. I had seen that all it held was fairy dust. Fairy dust and little promissory notes from people with no money but big dreams of owning their own property. The box was a myth perpetuated on the fantasy that if only we all kept selling it to each other and nobody actually looked inside then the magic money bubble would continue to grow. Then I had dared to peep and the madness escaped.

Sam, my wife, had first noticed that I was acting 'a bit odd', as she called it, and insisted I take some time off. I didn't consider my actions 'odd' at the time, and I'm sure I had a very good reason for burying the television set in the garden. It's just that I can't remember what it is now.

Getting away like this though had made me feel like a freed prisoner. My working life had always been spent mainlining coffee whilst watching a screen in a sealed office then coming home late to another sealed room with a plasma screen on the wall and a gin waiting on the table.

The tin had drawn me like a magnet; it was nestling on a shelf amongst a pile of incense burners, Chinese stress balls and sweet smelling joss sticks. Just one of a number of shops that littered Cornwall's seafronts. It was obvious the tin wasn't really for keeping tobacco in.