Whose reality is this anyway?

When John Barker gives up performing stage magic, he turns his skills to debunking fake mediums, spiritualists and anybody else claiming any sort of supernatural powers. 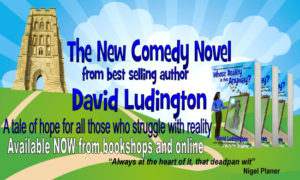 Whose Reality Is This Anyway?

No flimflam artist is safe from his wrath and no Spooky Mary goes unexposed. That’s why it’s particularly disturbing to John when he accidentally knocks over a man who claims to be Merlin, the mythical wizard from the Arthurian legends.
Despite several attempts to lose his strange, and slightly bewildered companion, John eventually gives in and agrees to accompany the man on his personal mission. A mission to uncover the final resting place of the equally mythical King Arthur. Following a series of secret clues hidden within a battered copy of ‘Fifty Shades of Grey’, the pair soon accumulate an odd assortment of helpers, including an Angel Channeller, a pair of Alien Hunters, a couple of hippies and a pig.
It’s not long before their trail of holes across South West England comes to the attention of both the authorities and the media and they soon find themselves ensnared within the grip of ratings-driven reality TV show producer. Along with a bunch of fading celebrities, the group are tasked with digging up King Arthur’s grave in front of the watching television world.
‘Whose Reality Is This Anyway’ addresses what it means to be an individual, to go against the flow and to risk being seen as a bit different. At its face, this is a gentle British Comedy in the vein of Douglas Adams, PG Wodehouse or Terry Pratchett. At its heart, this is a tale of hope and second chances.

“There’s loads that I recognised and loads that surprised, and always at the heart of it that deadpan wit of a true British cynic; David Luddington like reading your favourite classic sitcom. “ Nigel Planer