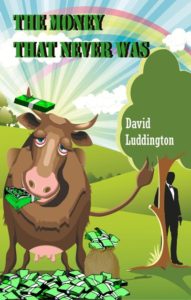 Charles Tremayne is a spy out of his time. After a long career spent rescuing prisoners from the KGB or helping defectors across the Berlin Wall the world has changed. The Wall has gone and no longer is there a need for a Russian speaking, ice-cold killer. The bad guys now all speak Arabic and state secrets are transmitted via satellite using blowfish algorithms impenetrable to anybody over the age of twelve. Counting down the days to his retirement by babysitting drunken visiting politicos he is seconded by MI6 for one last case. £250,000,000 of government money destined as a payoff for the dictator of a strategic African nation goes missing on its way to a remote Cornish airfield.

Tremayne is dispatched to retrieve the money and nothing is going to stand in his way. Armed with an IQ of 165 and a bewildering array of weaponry and gadgets he is not about to be outmanoeuvred by the inhabitants of a small Cornish fishing village. Or is he?

The Money That Never Was is a hilarious new novel by the author of the best selling "Return of The Hippy".

Combining the innocent humour of the old Ealing Comedies with themes of alienation and belonging David Luddington manages to weave an engaging tale of one man's personal struggle with a world gone mad. It just happens that the man who is struggling is a trained MI6 agent, ruthless and efficient and the world with which is is struggling consists of fish & chips, cider and fudge. Not to mention the bungling Barry Penwrith desperate to hang on to his windfall.

Tommy was particularly proud of his bicycle. It had been his birthday present of the day before. He was especially pleased with the loud horn his grandfather had attached to the handlebars. A series of different buttons gave a variety of sounds. His favourite was the one that sounded like a police car. Tommy’s grandfather was a tinkerer, or at least, that’s what Gran always called him. In true form, he’d tinkered with Tommy’s horn before attaching it to the bike. The volume level had now been increased tenfold making it sound like a whole squad of police cars.

Mr Green of course, knew nothing of Tommy’s new bicycle or its enhanced warning system. So when he heard the approaching sirens he and his colleagues decided to abandon their project of relieving ‘Shifter’s Road Transport’ of the contents of one of their vans. Had he known the true nature of the crates, he might have been a little more determined in his endeavours. But as his employer had not seen fit to enlighten him, Mr Green was not inclined to hang around.

When Tommy Penwrith cycled around the corner of the narrow Cornish country lane, the first thing he saw was Old Mr Trevellick’s tractor. It was parked across the lane, completely blocking it. He pushed his bicycle onto the grass verge and squeezed his way past, expecting to see Old Mr Trevellick digging ditches or something on the other side. But no, Old Mr Trevellick was not there. But there was a big van. It had ‘Shifter’s Road Transport Services’ painted along the side. The cab doors were open, but there was nobody around. Tommy made his way round to the back of the van. The rear doors were also open. One of them was hanging from its hinges. He peeped inside. Piles of wooden crates filled the interior. They had the words ‘Books for Pulping’ printed on each one. This was all very strange, thought Tommy. He decided to go home and tell Dad. Dad knew about books. He had lots of books hidden in his shed.